Thirty years ago to this day I received a phone call in the evening. I was a student in Quebec City at the time. It was my dad’s secretary Marie. She said “I have very bad news for you, Dad’s dead”. He had a massive heart attack while been driven home from London Luton airport. He’d been on a short business trip to Spain. When we opened his brief case we found a hand written note in his passport to my Mom. It said “My love, if I don’t make it, know every minute of it has been worth it, carry on with the boys”.

My dad was known for his very successful career; working class boy made good. He was the first person in his family to receive a proper education. He received a scholarship to a good school and went to university and received a PhD in Chemical Engineering, all by the time he was 21. I later learned he had worked on secret war projects. His education kept him out of the army, unlike his father who had served in the Cavalry in the First World War.

During the Second World War, like many children in big cities he was evacuated from his Birmingham home to the countryside, and separated from his parents. Dad lived on a farm in Wales and his parents visited him there. Though this may sound like it was a burden for him, he remembered it fondly and learned country ways and love of the country that stayed with him all of his life.

At the time of his death he had reached great heights in his career. He was de facto number two in Imperial Chemical Industries, at one time UK’s largest employer. His friend, the charismatic Sir John-Harvey Jones, was Chairman. My dad was instrumental in getting Sir John elected to the board over the conservative wing of the company. My Dad and Sir John were liberals and considered a thorn in the side of Maggie Thatcher. He deplored the class warfare and division of that time. 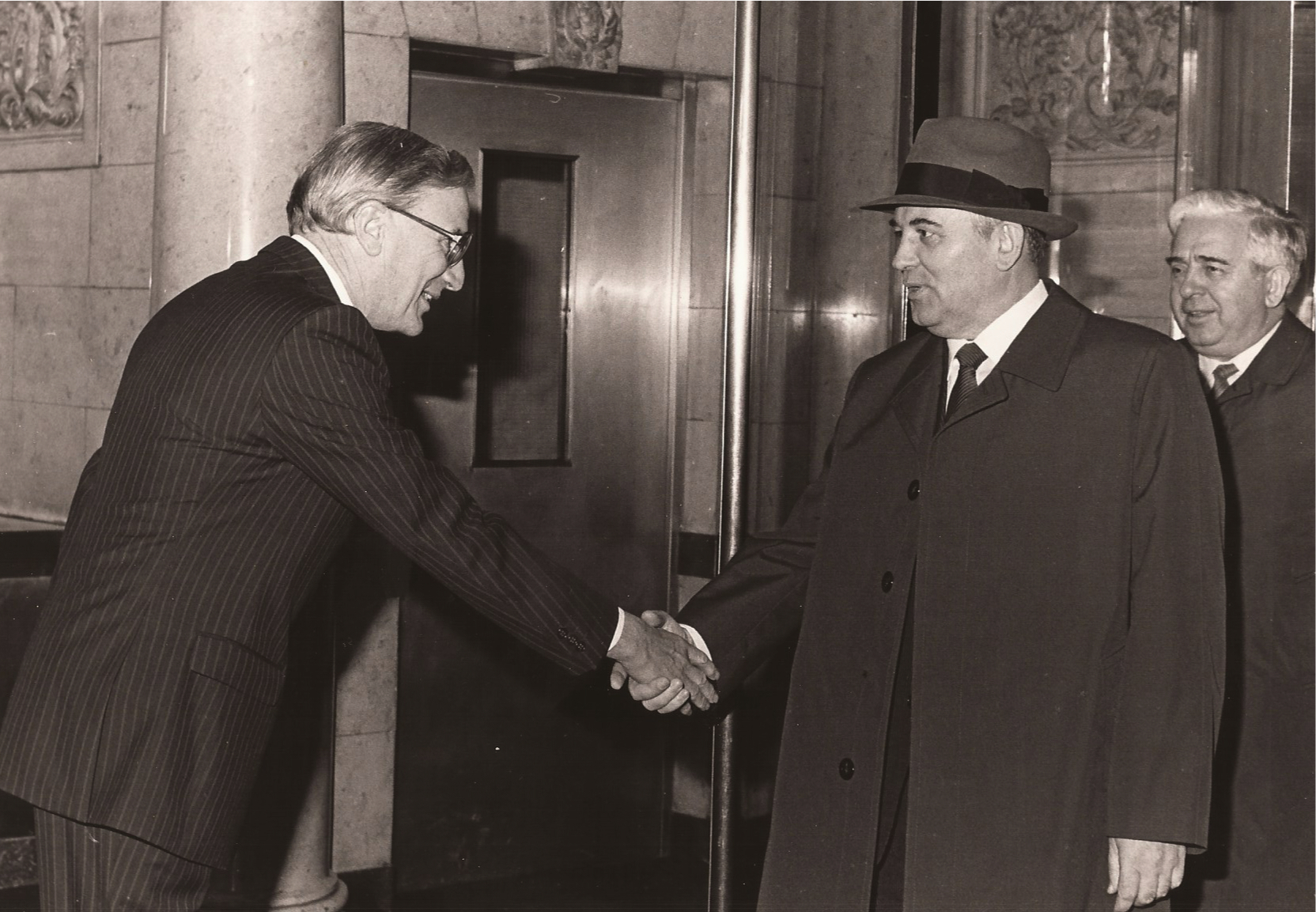 He traveled to over a 100 countries on business. Often places off the tourist map like Albania, the Soviet bloc countries and Middle Eastern countries.  He was a regular on the Concorde London to New York flight. He rubbed shoulders with Arab sheiks, captains of industry, diplomats, and political leaders. I remember him calling me after he had met Mikhail Gorbachev in London in 1984. Gorbachev was head of agriculture in the Soviet Union at the time. He told me that there was a good chance that Gorbachev would be the new leader and he really hoped he would be because he was intelligent and progressive.

My dad was an internationalist and believed in cooperation, peace, and diplomacy. After a trip to LA where he met the heads of US corporations he said to me “nice people but completely insular view of the world”. He had offers to go to the US and work. He could have made 5 times his salary. However he told me he owed his education to England and his loyalty was to England and to create jobs in England. He also believed in unions and sensible pay for executives. His salary was probably less than 10 times the worker’s salary. He said, “I don’t want someone putting a brick through my window because of the unfairness of it all.”

Despite the influence and power he had, he remained a humble working class man. He treated everyone the same from secretaries and chauffeurs to top executives. His chauffeur Charles said to me “I loved your dad, he was one of a kind”. One time Dad found stolen goods in the trunk of the company Jag. Charles told my brother that Dad was really mad but he didn’t fire him or anything, he just said “I don’t ever want to see that again”. In Wales, where he was a plant manager, the locals also talked about him as one of a kind. At his funeral his friend Ralph French told a story about when they were in Moscow in the back of a limo. After days of eating caviar my Dad said “I could murder some fish and chips.”.

Though he lived the 5 star life on his business trips, on vacations he often packed the camping gear into the car and went on camping holidays in Europe. It was a strange sight pulling into a French camp site in a burgundy red Jag with a roof rack of camping gear.

In fact he and my Mom were quite adventurous. One holiday we camped for a week in an Alpine meadow of the Spanish Pyrenees. A guide with a donkey piled with camping gear took us up the mountain and dumped us there for a week. His success afforded us many wonderful vacations, ski trips in Italy, vacations in the Greek Islands and much more. We were lucky kids in many ways.

Throughout it all football was the thread that always kept us boys and Dad bonded. We had a field at our country house in Cheshire and Dad often came down and played with us in the mud. But it was watching football where we spent the most time. Dad took me and my brothers to Stoke City Football Club in 1970 and we became regulars at home and away games for years. We saw the greatest players of the 70s including George Best and Pele  who we saw at an exhibition match at Aston Villa. A lot of the time was just being together in the Jag or the Rover on the drives, especially to away games.

I could write pages just about the football, especially the night games, Stoke City’s big semi-final replays in 70s like the 3-2 win against West Ham that took Stoke to Wembley. When I was at university in Canada I received a regular package of clippings from the Stoke Sentinel about the football. His connections got us into a few big games too like the 1978 European Cup final at Wembley and the 1982 World Cup final in Madrid in 1982 but the Stoke games were the best.

Dad had the fortunate balance of right and left brain capabilities. He was brilliant at science and math but also enjoyed literature, arts, and culture. As kids we were dragged to plays and opera but we benefited from it. He shared books with me that he loved like Watership Down the Everyn Waugh novels and we enjoyed talking about them. And he loved Fawlty Towers, and other British comedy that we all enjoyed together as a family.

He died way too young at the age of 59. Though he packed in amazing experiences in those years. I last saw him in Montreal a couple of months before he died. We had the usual bang up meal at one of the best restaurants in town. I talked to him about Maharishi International University, he had learned Transcendental Meditation and he told me about a company in Japan where the whole board meditated, and he was excited about that. After his death I would be successful in introducing Transcendental Meditation to his friend and business celebrity Sir John Harvey-Jones. He’d be happy with the direction I took. He believed in world peace and detested the war mongers like Margaret Thatcher.

I thought I was grown up when he died but I was only 25. It was like growing up too fast when he died. I wore the rabbit fur hat he brought from Moscow for years until it wore out and fell apart. I still have the elephant collection, many of which came from his trips to Africa and India. And I took his Pentax camera when he died which got me started on photography. Stoke City is forever with me and I have passed that tradition onto my son Dylan. Disdain for elitism, and treating everyone the same, I hope this stays with me as well.

I’ll finish with a story that says a lot about my dad. After his death I went to visit the then current Chairman of ICI. I had a meeting with him on the swanky glass executive floor, in the River Thames office. On the way out the Chairman escorted me to elevator. The floor security guard was standing there. I recognized him and I said “you are a Glasgow Rangers fan right? I am Philip Harvey’s son, I remember my Dad talking to you about football”. He lit up with a big smile and said something nice about my dad. The Chairman looked at me with a “why the heck he is talking to the security guard” look on his face. The story sums up my dad, he sincerely connected with people of all walks of life and left them feeling valued.

I am so grateful to have such a wonderful dad, I just wish he could have stayed a little longer. I know he’d love knowing that Dylan goes to school in his Stoke shirt. I am sure he does know.

Want more inspiration? Sign up for my email newsletter and I will send you more inspiring content.

Inspiration and Guidance for Awakening Souls

You have Successfully Subscribed!